Philadelphia Flyers prospect Morgan Frost is one of 10 CHL forwards who were first round picks from the 2017 NHL Entry Draft. Frost finished the regular season with the most goals, assists, and points (in all-situations) among 18-year-old forwards in the Ontario Hockey League (per prospect-stats). He also had the most primary points of any 18-year-old OHL forward.

Those stats tell a very compelling story of success, but they only provide information at a surface level. These numbers don’t provide much in-depth context on their own, though. Upon further examination and analysis, they say a lot more in comparison to the other five forwards who succeeded individually in the CHL: Gabriel Vilardi, Nick Suzuki, Michael Rasmussen, Cody Glass, and Robert Thomas. These stats and their application were formulated by Will Scouch (@Scouching). An important thing to keep in mind when considering these statistics is that Frost’s team, the Sault Ste. Marie Greyhounds, averaged 3.18 goals per game at 5v5. The next closest team among the players examined here was the Owen Sound Attack, who scored 2.97 goals per game at 5v5.

G% refers to Goal Involvement. This is calculated by the player’s goals per game divided by team goals per game. 15% in all-situations is generally considered elite. So, each of these player’s respective 5v5 goal production is quite jaw-dropping. Especially Suzuki and Vilardi’s. 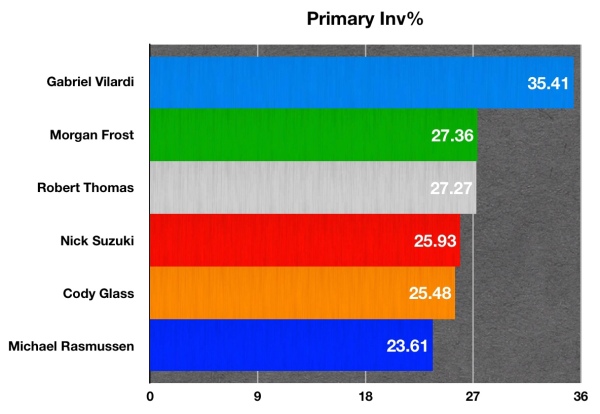 Primary Involvement% alludes to a player’s primary offensive involvement (goals & primary assists). Calculating this is similar to G% but you substitute primary points per game. 30% is considered excellent. So, Frost’s standing here is to be commended.

Involvement% takes into account points per game divided by team goals per game. This is the only involvement metric where Frost ranks outside of the top 3. The fact that his team scores the most goals per game at 5v5 comes into play here more than the other aforementioned metrics. 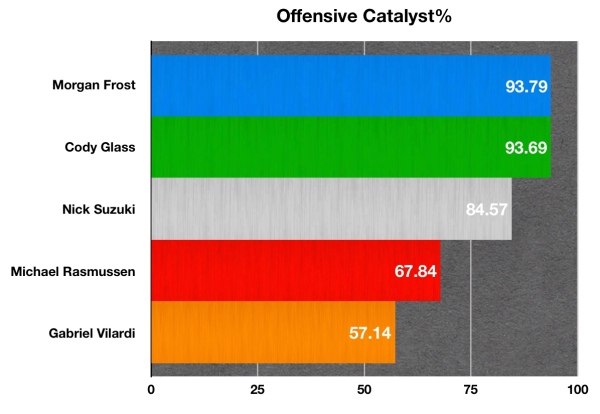 Offensive Catalyst Percentage describes the percentage increase in even-strength scoring while on ice. Morgan Frost tops the field here. This is valuable information because it highlights yet another of Frost’s strengths: his defense. His attention to detail on defense helps his team win games. There would be games where his play below the red line would lead to odd man rushes the other way. Frost utilizes his high hockey IQ to anticipate what his opponents are planning on doing next in the offensive zone. This ability allows him to break up plays or to help out his teammates if there is a blown coverage. Another aspect of this stat underlines his prodigious offensive contributions. Good things tend to happen when Morgan Frost hops over the boards and onto the ice. Side note, Robert Thomas is missing from this graph due to the fact that he was traded during the season. The accuracy of the data would be difficult to truly gauge as a result.

What Does it All Mean?

Unfortunately, we can only work with what is publicly available via prospect-stats and @Scouching data. There is some context missing here that can help fill in some of the gaps. Do these players get to play with great linemates who artificially inflate their numbers? What about quality of competition? Do they get to feast on inferior opponents? Or is it the opposite? Fortunately for us, this information is available…sort of. Time on ice for CHL players is not available for public consumption but prospect-stats utilizes estimated TOI as a proxy. Going off of that, it’s easier to explore TOI among quality of competiton and TOI among quality of teammates.

This is where things get really interesting for Morgan Frost. Throughout this elite group of players’ regular season, Frost spent the second fewest amount of TOI among quality teammates while at 5v5. His offensive production takes on a whole new meaning now. Frost’s exemplary production at 5v5 indicates that he produced no matter who he played with. This suggests that he is the primary driver of offense on whichever line he pivots. Considering the Flyers have consistently struggled to find production on all four lines the past few years, the potential of having someone like Frost who can succeed with any line combination should be music to the ears of Flyers fans.

Frost competed against quality opposition approximately 14.36 TOI at 5v5 per game. With that in mind, his 5v5 numbers were against stiff competition for a large percentage of his time on ice. Possessing the skill to be able to produce against quality opponents is (hopefully) a sign of what’s to come in the not too distant future.

The Rest of the Field

Vilardi, Suzuki, Glass, Rasmussen and Thomas have all proven to be successful players at this level. Their talent and abilities shouldn’t be overlooked or underplayed. Instead, their numbers and statistics can be used to compare against Frost’s to see where he stacks against the best of the best in the CHL.

When will Morgan Frost suit up for the Flyers? It could be as soon as this upcoming season. However, some caution is in order as this twitter exchange between Flyers writer Bill Meltzer and I shows. Please disregard the typo in the first tweet. Or you can point and laugh. That’s okay too! 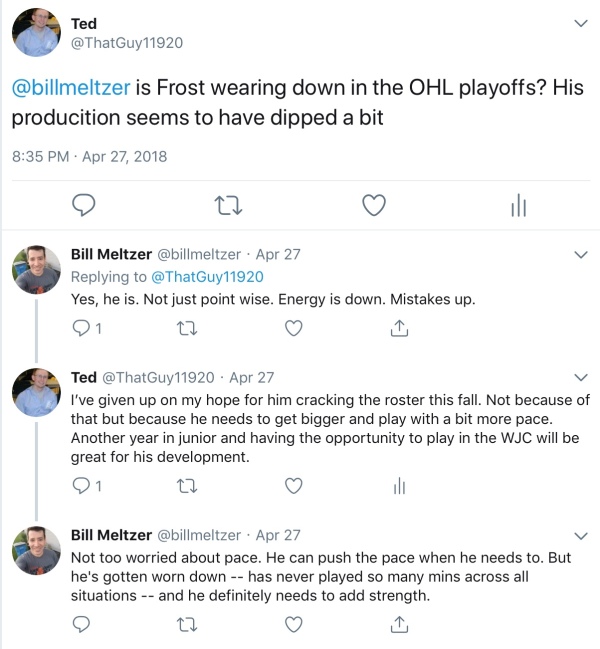 Frost’s regular season points per game was 1.67. During the OHL playoffs, it dipped to 1.21. One of the many things Ron Hextall evaluates with his prospects is how they fare throughout the season, including the playoffs. One of the reasons Ivan Provorov did not make the Flyers immediately after he was drafted was because he wore down in the WHL playoffs during his draft year. The same thing may have happened with Frost.

He needs to have an extremely intense summer of training to put on enough muscle mass to be able to survive in the NHL. While isn’t unheard of for prospects to put on 20 pounds of muscle in the offseason, it’s just not that realistic. Putting on that much muscle that fast could also negatively affect his style of play. It would do him a world of good to gradually put on the muscle over the summer and throughout the next year. That will allow him to acclimate his game to his new frame. He could surprise us though and make the team out of camp.

It will be very interesting to see how much offense he can produce next year, when two of his most frequent linemates from this past season will graduate to the AHL (Taylor Raddysh and Boris Katchouk). How will Frost’s offense be affected by their absence? Seeing how he produced with a variety of linemates this season, it most likely won’t matter who he plays with next season. Frost is going to be productive no matter the circumstances.

Flyers Fall to Caps in Shootout

View all posts by flyersgraphs →